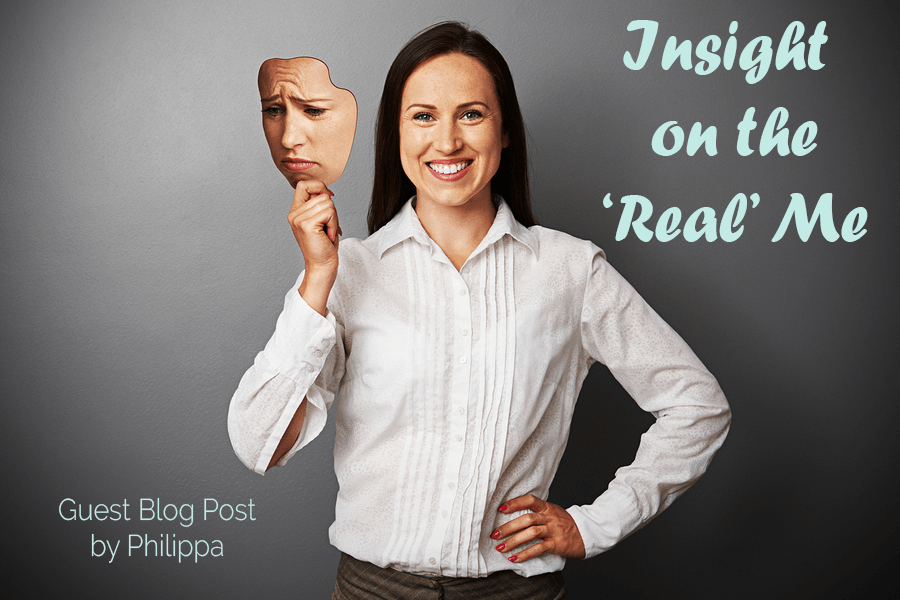 This week’s blog is a guest post from someone I have come to admire and respect greatly in recent months.  I first connected with Phillipa after she had bought the first book in the eGuide Series Depression – ‘Living With Depression is Rubbish‘ and tactfully offered to proof read my eGuides (yep, something I’m pretty rubbish at!); of course, I jumped on her offer.  After reading the complete series, Philippa shared her thoughts with me on how she interpreted the books and I thought it was so personal, brave and inspired, I asked if she would allow me to share her thoughts in a blog as I think it will help others experiencing depression right now.  She kindly agreed and this is what she sent me.

“The depression is NOT a part of my personality”

“Neuroscience teaches us that the primitive brain – the part that takes control in times of stress and creates and continues a state of depression, shutdown, inertia, uncommunicative misery, is NOT an aspect of our true personality. It is a hard-wired process which over-rides the personality and is simply reacting in its primitive way to its perception of danger.’

I ‘got’ this when I read it in Emma’s ebook ‘Living with Depression is Rubbish’, but didn’t follow the thought process through to its natural conclusion until now. Because of my lifelong problem with depression I’ve constructed a perception of myself which includes a lot of negative stuff about the times when I’ve been overcome by it and it’s blighted my relationships with other people. I can think of countless family gatherings and social occasions when I’ve been withdrawn and unable to even talk normally, let alone join in with humour or lightness, and in particular completely unable to deal with any boisterous person who drew everyone’s attention to my low mood in a rude way and tried to force me to ‘lighten up’ (I am thinking of one particular person here, whose behaviour has since been recognised as unacceptable).

Sometimes people have told me outright that their friends/family thought I was rude, aloof and unsociable because of my depressed behaviour, but of course you don’t need an outsider to point this out – you know at the time that you’re falling short of expectations and it just reinforces the idea that you’re a failure, that people don’t like you, that you are forever destined to be isolated and misunderstood because of the depression you suffer.

The lightbulb moment this morning came when I was thinking of the nice social occasions I’ve had in the last week or so, when I have not been depressed, and the penny dropped that people really like the real me. And these are people that I like and admire and want to think I have lots in common with. Therefore the person I am when not overcome by depression is likeable. And the depression is a product of the primitive brain, not the real me. Therefore I don’t need to judge myself harshly by the way I’ve been when depressed. I am allowed to enjoy the fact that my true personality is OK, I don’t have to feel flawed and damaged and below standard any more.

This may all sound very long-winded and taking a long time to state the obvious but something very important has just become scientifically clear to me. The depression is NOT a part of my personality, it is a separate force. Therefore I don’t have to try to incorporate it into my overall perception of myself, I need to completely separate it and disregard it.

Maybe I could make the analogy of my style in dress – which may sound superficial, but clothes are very important to me. I know I dress well and people often admire my clothes and say I look nice. Well, supposing I’m caught in a storm and find a dreadful, frumpy old raincoat dumped somewhere and put it on because I have nothing else to wear. I turn up to meet people wearing this thing and I look nothing like my usual stylish self. Friends would wonder what was wrong with me and strangers would see me as dowdy and unattractive.

But I can take the horrible coat off and underneath it I’m wearing a gorgeous dress which I chose for myself because it suits me. The raincoat is not part of my wardrobe and luckily the weather improves and I can throw it into a rubbish bin. I don’t have any regret about doing this because it’s not mine. It was a temporary reaction to a temporary problem and I have no attachment to it whatsoever.

I can continue the analogy, The raincoat is horrible because it was made by someone with poor skills and is not designed in any way to look nice or complement other clothing. Its only purpose is to protect whatever is underneath, regardless of what that is. And it serves that purpose perfectly. However once the storm is past it has no value or meaning at all.

In the past I have had some attachment to depression because I perceived it as part of my personality. I thought I had to see myself as a depressed person. Now I suddenly realise that this is not scientifically true and it is amazing. I have tears in my eyes as I type this. It is a quantum leap in my brain! Once this idea becomes a true thought pattern – which I know may take time as the opposite view has been ingrained in me for so long – it can be really transformative. I’m going to brand my negative thoughts and tendency to fall into bad thought patterns as ‘the nasty old raincoat’ and remember that they’re not mine and I don’t have to wear them.

It’s early days I know, but this new understanding of something I thought was a permanent, integrated part of me is really empowering. I had tried anti-depressant medication in the past but it didn’t feel right – it was like an emotional painkiller. Even though I was relieved of the day to day anguish, I knew all the bad feelings and thought patterns were still there underneath and my brain was just being tricked into not engaging with them. More worryingly, I seemed to have lost an important part of my rational brain as well – I made bad decisions and behaved recklessly, and was unable to process the results properly as my brain refused to acknowledge what I now know were genuine and important warning signals.

My heartfelt instinct was that somehow the answer lay in working with the brain as it really is, not messing it around with pharmaceutical drugs. I just didn’t know how this could happen and felt completely stuck and in despair. Now I’m beginning to understand that I can learn that ability, and it is already getting results. It makes sense to me rationally, as someone with a scientific mind, and at the same time on a purely subjective level I’m noticing myself becoming more aware of my thoughts and where they might lead me. Truly this is the most helpful process I’ve embarked upon after years of feeling that I was the victim of a damaged mind. Not permanently damaged now, but just shaped by bad thought habits and neurological processes – which – Eureka – I can change.

I think Philippa’s analogy of depression as wearing a coat that doesn’t really belong in her wardrobe is inspired.

Thank you Philippa for your input, most gratefully received.