You were not born depressed 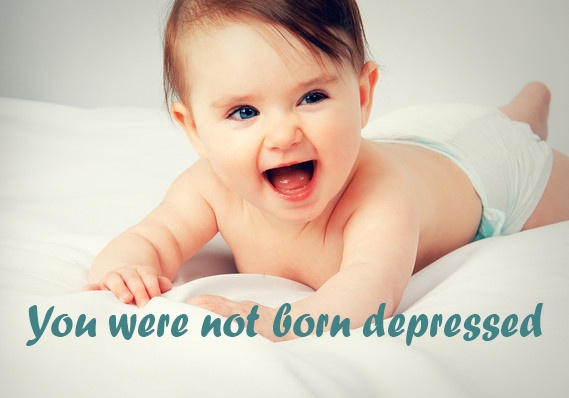 This weeks post is slightly controversial, so stick with me…

You were NOT born with depression!

There is no gene found to cause depression and you do not have to live with depression.

The simple fact is no baby is born depressed or anxious, it is something you learn from the influences around you in life.  Our brain is what is termed as ‘plastic’ which basically means it is constantly being reformed and rewired, new neural pathways are forming all the time throughout our life.  As a child this happens very quickly, the input and new learning a child is exposed to are huge, so the brain very quickly forms these networks.

In our teenage years, we start a pruning process, starting when we’re 12 until 18-ish for girls and boys into their early 20s.  The pruning process is like trimming a hedge – all that information we absorbed as a child was stored in brain cells we grew to accommodate this it, but when we hit 12 we start ‘sorting out’ which information is useful and we need to keep and what we can let go of as irrelevant or wrong.  It starts at the back of your head and slowly progresses across the higher cortex towards the pre-frontal cortex which is where the complex reasoning happens.

People who are depressed think in a negative way, they negatively introspect about themselves, their life and their past and view the world around them in a negative way – this is something they have learned growing up from the influences around them.

When you think in a negative way and are not doing the things that create the essential neurotransmitters such as serotonin your levels deplete to a critical level and you slip into depression.  The things you need to do in order to create serotonin are ‘positive activity’, ‘positive interaction’ and ‘positive thinking.

The further you slip into depression, the less motivation you have, the less you think in a positive way and everything becomes harder; life becomes more challenging life and the negative thoughts just keep coming back.

This is a big subject and I explain more in the eGuides, but if you have depression you will be able to relate to the negative thoughts intruding into your mind persistently.  This is part of the depression and has gradually built up over time growing up and through your life.  It can also be something that sets in after a traumatic period in life as an adult and you hit a bout of depression but it was not something you were born with.

Now, just to through a bit of a spanner in the works for people who have heard depression is in the genes – we do have cells called ‘eipgenetic’ cells or DNA which means that they are switched on or off depending on a trigger.  There is huge amounts of research happening into what triggers epigenetic cells of which thousands of different types have been discovered including cancer cells, depression and anxiety and there’s still much we don’t know about their triggers and conditions that lead to eipgenetic cells being switch on, but we do know that some of the triggers are the hormones and neurotransmitters we produce.  These hormones and neurotransmitters are influenced by how we think, for example Adrenalin, cortisol, serotonin, dopamine, noradrenalin etc

So it’s possible, indeed probable, that your parents or grandparent were depressed or anxious which makes perfect sense because you will have grown up around them and learned their speech patterns, subconscious language and behaviour from them, but this does NOT mean it’s genetic, it means you have a family history of depression, they are not the same thing.

Living with depression, choosing to live with depression or learning that you don’t have to live with it is the subject of an eGuide being launched this week called ‘Living With Depression Is Rubbish’ – recommended if you’re interested in finding out more about how to cure yourself of depression.

Some people react with anxiety to stressful situations, some people with depression and some people with anger, some people do all three of these things.  As a result you might have people in your family with different symptoms, eg OCD or IBS, but it is highly likely that if one person in the family has anxiety, depression or anger issues, it will be in other members of the same family – that’s because of the environment growing up, not genes.

The good news is that whatever upbringing you had, you can learn how to reform the neural pathways in your mind and you can let go of depression.

You don’t have to live with it and you weren’t born with it, but it is up to you to decide you are going to take action and learn new ways of doing things, change the way you think and change behaviours that lead to depression.  Or continue to do the same things you’ve always done and stay exactly how you are. 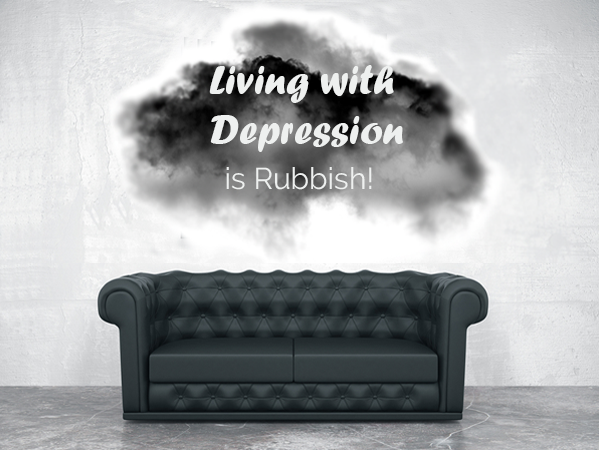