One Man’s Story of Recovery from Depression 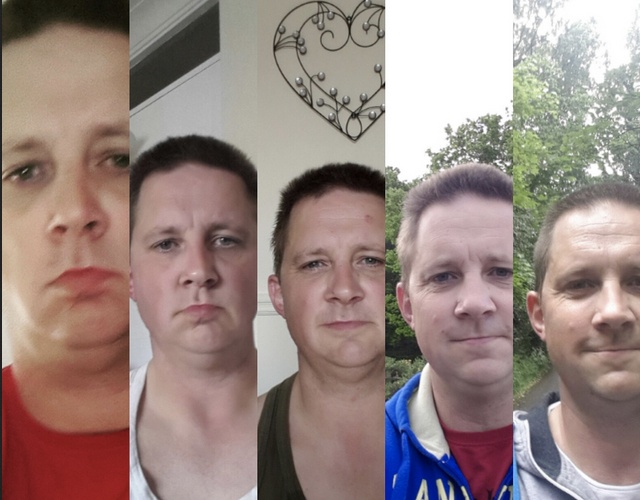 I would like to introduce you to someone I admire hugely and someone else who is living proof that it you don’t have to live with depression and you can bring yourself out of it when you have the right attitude backed up by determination.

Richard Surman is an inspiration, he was hitting rock bottom when he made the decision things had to change and he did it all by himself. He’s not a client, he’s not an expert, he’s just an ordinary bloke with extraordinary determination.

With Richard’s permission I’ve used a picture that he posted in his blog one day, you can just see the depression lifting from his face.

I asked Richard if he would do a guest blog for me in an interview style and he happily agreed.  The answers below are in his own words and I would particularly like to draw your attention to the two final questions, they are full of advice and wisdom.

Q Richard, I think it was January 2015 we first connected on Twitter.  At that time, what was life like for you?  If you don’t mind sharing, what was your lowest point.

My lowest point was losing my father, the phrase “he’d had a good innings!” didn’t help.   The negative impact of my my first marriage break up hit me as I hadn’t had anyone to talk to.  I began to realise I didn’t really know who I was.

Q What triggered you into action and into reaching out for help?

I bumped into someone I used to know, he pointed out I wasn’t the positive person I used to be and he knew me well.

Q What was the pivotal point that changed things around for you, can you remember a moment the light bulb switch on and you decided you were going to find a way for things to get better.

It was a new years resolution that I wanted to be “me” again, positive, up beat me. Yes, life gets in the way, but I always used to be a glass half full guy.

Q What in particular helped you along the way, what things did you do and what steps or actions did you take that helped.

The two major influences were, you and the Chimp Paradox, both of which I highly recommend.

Q How did you stay focused on staying positive when you have low or stressful patches.

With your help, and the Chimp Paradox teaches you to recognise when your chimp, (who I named Clarence) is high jacking your mind.

Q What has been the biggest change in yourself that you’ve noticed since you started your journey back to you.

I’m definitely more positive now, slowly starting to believe my motto “I can, I can, I can you just watch me.” and I am less likely to react when there’s another chimp in the room.

Q You often talk about your fiancé, Lou in your blog and it’s obvious you are very close – what has been the best thing Lou has noticed that is different about you now.

I’m more able to offer solutions rather than just see a problem.

Q How has your life changed since you started your journey

I don’t get our of my tree, especially when I’m driving in London. I’m more able to deal with things in my own way.

Q What advice would you give to someone wanting to start their journey out of depression.

I never relied on anyone, I had influences, to borrow a phrase from the Chimp paradox, Emma is a remote part of my troop or for Star Wars fans – my Yoda, but if I don’t listen it’s a choice, as it is everyone’s.

TAKING OWNERSHIP IS THE BIGGEST STEP.

Getting in touch with my old self was a good step too. Stop being a passenger in your own life, take control, if you cannot surround yourself with positive people, then choose positive people on facebook or twitter.

Small changes now become big changes in a year’s time. Have some “you” time, for me it’s time with my dog on the lead in the woods or it used to be fishing.

Q Is there anything you would like to add?

I can’t stress enough the influence that Emma and the book The Chimp Paradox have had – but I did it myself.  Like the fool in the tarot cards or like in star wars, ‘I chose my own journey’.  Who I wanted in my troop, which has seen one of my worst influences cut away and not getting annoyed when someone didn’t want me in their troop.

I realised I was free falling into depression, but to use another vehicle to explain it, I now see myself as the Captain of my ship, Emma (as much as she denies it) is my Navigator and the book my Tactical officer, but I choose what I listen too, what I act upon and what I don’t and I know it’s MY responsibility if it works or doesn’t.

The one thing Dad would not have wanted, was to hold me back, which for nearly three years he was, I had to let go, I’m not saying I didn’t love him, but I hadn’t realised what a huge influence he was.  He would say what had to be said, but then always had my back.

My break up, hurt but I hadn’t realised the damage until I met Lou, and she nearly left because I didn’t communicate, just boxed everything up which I also now realise wasn’t a good thing, either for me or our relationship.

Also thinking about it now, I realise that, as Emma has taught me, taking ownership of a problem is a huge step, if you turn around and say “well you told me to…….” you can’t take the problem on, because you’re not owning it.

If you look at the problem and say to yourself “what, if any part of this, could I change?” you take ownership of it, if you can’t change it, then accept, move on and plan how you’ll avoid a problem like that, in the future. It maybe a person, it maybe your reaction, it could even be what you’re drinking, but you can’t do anything until you TAKE OWNERSHIP OF THE PROBLEM.

Get in touch with your old self and remember how you used to be.  Try doing something you used to enjoy. Sport helps a lot by burning off adrenaline. Choose your influences, it may not be easy in reality, but it is on twitter and other social media

I play ‘turn the negatives’ I enjoy that a lot. A leopard can’t change its spots, but it can change the way it sees them!

And when someone is giving you a critique they aren’t being personal, tell your chimp, “they’re not bring rude, let me (your human) deal with this, if I feel they’re being rude I (the intellect) will deal with it, if you (my chimp) get involved, everyone will get hurt!” When you deal with your chimp it’s important to tell it the TRUTH, don’t try strong arm tactics as the Chimp is ten times stronger than you, it has to be to defend you.  (The Chimp Paradox by Prof Stephen Peters)

I would like to thank Richard for sharing his experience – you can follow Richard’s blog From Hell To Eternity and learn more about his journey.  I have also posted a link below to the book he talks about, The Chimp Paradox 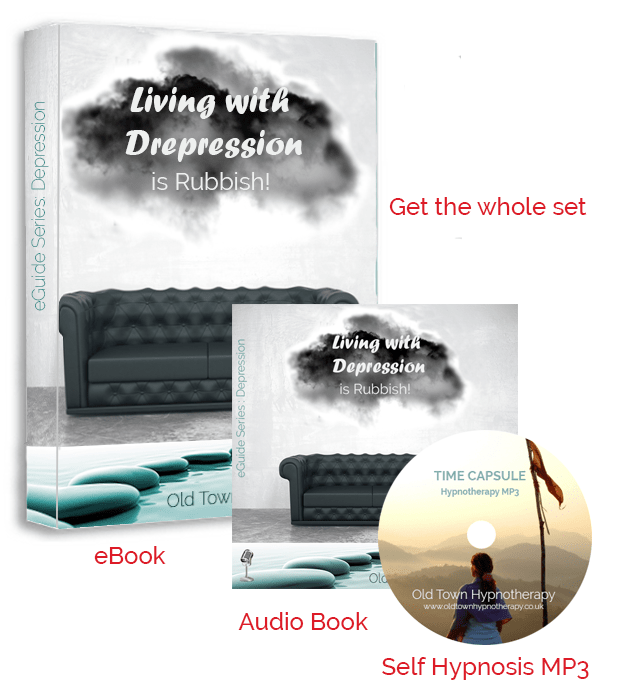