How to say ‘NO’ without feeling bad about it. 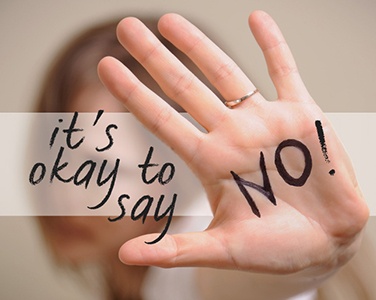 Do you ever get yourself into those situations where you just open your mouth and say yes to something you don’t really want to do, and even as you were saying it you’re thinking to yourself why am I agreeing to this or why did I just say that? Saying ‘no’ to somebody who is asking you directly, put on the spot, it can be incredibly difficult and yes just seems to slip out instead. Here is my top strategies how to say no without feeling bad about it.

1.Defer decision and buy yourself some time

Mostly won’t have to make a decision on the spot and you can develop your own go to phrases instead of yes. A friend of mine always says it’s feasible I’ll give it some thought it wasn’t long before I learnt that actually meant no,. Another good one is I’ll come back to you on that or I’m not sure what I’ve got on at the moment can I check

Directness often compels you to be direct in response, which is a great strategy if you’re the one trying to get an answer from someone, but if you on the receiving end of directness it can feel very uncomfortable. Try throwing a question back about their request, For example, ‘when is that?’ or ‘how long will it take do you think?’ or ‘where?’. Any open question (starts with how, what, why, when or where) this forces the other person to answer with the sentence rather than a yes or no answer, buys you some thinking time and possibly gives you something on which to base your reason for ‘no’.

3. Blame something or somebody else

This might seem a little unethical or lacking in integrity but use somebody you know will understand and won’t mind and tell them you’ve used them as an excuse. I used to do this for my foster teenagers frequently – if they were feeling pressured into doing something they didn’t want to, I would tell them to blame me, I didn’t mind in the slightest if it meant them finding an easy way out of a situation.

Of course, this isn’t a life strategy and it is far better to take responsibility for your decision and actions, but if you’re feeling in a tight spot, from time to time it’s OK.

Remember that it is okay to say ‘no’ and be okay with saying ‘no’. Other people don’t mind and will actually respect you more for being nicely assertive.

Think about it this way, the other person will prefer you to be honest and say no. How bad do you think they would feel if they knew that their request was causing you stress and anxiety. People mostly prefer to know where they stand in a polite way then to be let down when you say ‘yes’ but later can’t actually follow through with your commitment. If you put yourself in their situation, what would you prefer the other person do:- let you know straight away it wasn’t possible or feel under pressure or let you down?

You may have unwittingly taught people to take advantage of you by saying ‘yes’ all the time. They will have learned that you are always happy to help them out and oblige – this is OK if you are indeed genuinely happy to do so, but if you are feeling taken advantage of or resenting always having to help other people, you need to retrain them by learning how to say ‘No’. It will feel hugely uncomfortable to start with, but it wont take long before people fit in with your new found assertiveness and you will find it easier to do.

Nobody wants to feel like they are being mean or selfish, but saying no doesn’t mean you are selfish because it is important that you look after yourself as a priority.  Saying ‘no’ then resenting other people because you are doing things for them actually makes you selfish because it’s not coming from the right place in your heart.  You need to get a balance in life and people genuinely don’t mind you saying ‘no’ from time to time.