The Holy Man and the Animals 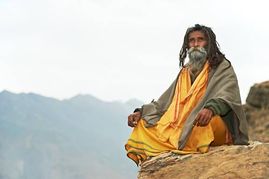 Metaphors don’t need any explanation, your brain will take from it what it needs to and will understand it in a way that is relevant to you.

Watch the video or read the script.

understanding of life and it’s meaning.

and the holy month forced to dig his own well.

During the course of his difficult labour,

the holy man noticed that many animals were also suffering and

many of them were beginning to die.

Feeling sincere compassion and empathy for these animals

he decided to make them their own trough.

He spent hours and hours in the sweltering heat working on

a trough for the animals

first he had to cut down a large tree and then scrape it out it to make a basin.

to fill the trough which took all his time.

rabbits, mice and even a tiger all came to share from the trouble made by this generous man

As the summer went on, the animals began to notice that the Holy Man was begining

to lose weight and look ill.  They noticed that he was weakening and that in his generosity

The animals spoke among themselves and decided to repay its kindness.

They foraged and collecting all kinds of things for him to eat,

finally came to an end.

Although it did come to an end and the streams did refill, the Holy Man

and the animals continued to remain friends.